We’ve said it before, and we’ll say it again – Samsung currently has a really strong Galaxy A lineup. They took their “Awesome is for everyone” slogan to heart with interesting and fresh designs, as well as good value specs. Better still, the Korean giant definitely recognizes it has a good product on its hands and is now investing even further in extending its life. Particularly the Galaxy A52, which now has a new A52s 5G variant. 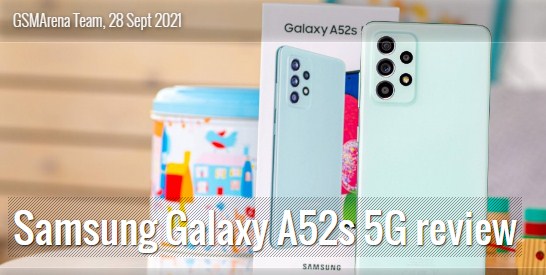 Technically, it can be considered another generation of the product, compared to the vanilla A52 and the A52 5G, though there aren’t too many new changes here. The first two A52 models came out back in March, with the 5G one swapping the original’s Snapdragon 720G for a 5G-capable Snapdragon 750G and the 90Hz, 6.5 Super AMOLED display for a 120Hz one. All the while keeping the two devices physically identical.

Now the Galaxy A52s 5G takes the Galaxy A52 5G and builds on top of it even further, swapping the chipset once again with an even better Snapdragon 778G 5G chipset, effectively addressing one of the few issues we had with the original – a slightly underpowered chipset.

And that’s about it – a significant leap forward in performance and a few other minor specs additions that the new chipset affords, like Wi-Fi 6 compatibility, but still the exact same phone. Arguably, with less changes than going from the vanilla A52 to the A52 5G.

That’s definitely not us complaining, though, since the price tag on the Galaxy A52s 5G is practically unchanged either. Plus, you are still getting an excellent device, with some highlights like that 120Hz, 6.5-inch, Super AMOLED panel we just mentioned, a solid quad camera setup – the same as before, a gorgeous and youthful, playful exterior, with a rubber-like finish, pastel colors and an IP67 rating.

Once again, you physically get the exact same 159.9 x 75.1 x 8.4 mm phone, with a plastic yet sturdy frame and a Gorilla Glass 5 front. It even weighs the same at 189 grams, which makes sense since the battery is the same 4,500 mAh one. It can be charged at a rate of up to 25W, like before, but this time around, you get a 25W charger in the box, as well, which is even more added value on the Galaxy A52s 5G.

The accessory package hasn’t changed drastically, with the important exception of the included charger. The Galaxy A52s 5G comes with a 25W charger in some markets instead of the lesser 15W unit the A52 and the A52 5G came with. You do need to check your particular retailer, though. So, that’s a nice little potential value-add bonus.

Beyond that and a relatively short USB cable, there is nothing extra inside the retail box. No case or anything like that, which you might get with budget offers from other manufacturers. Even so, it’s all about perspective, since with something like the significantly more expensive Galaxy S21 series, you don’t even get a charger at all.

Disclaimer. We can not guarantee that the information on this page is 100% correct.